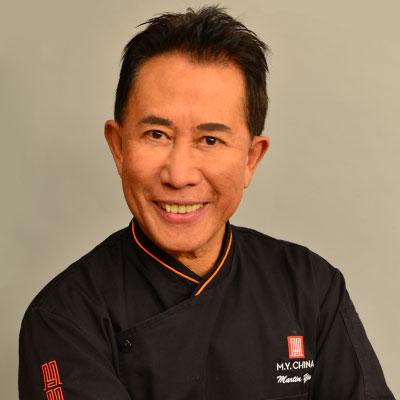 A legendary television icon and host of over 3,000 cooking shows around the world, Martin Yan is a Master Chef, a highly respected food consultant and chef instructor, a prolific cookbook author with a library of 30 titles, among which are the award-winning Martin Yan’s Feast, Martin Yan’s Chinatown Cooking (with intro by Julia Child), Martin Yan’s Quick & Easy, and Martin Yan’s China.

Born in Guangzhou, China, from a restaurant and grocery family, Chef Yan acquired a passion for cooking at an early age as a young apprentice in a popular restaurant in Hong Kong. He honed his skills further at the Overseas Institute of Cookery in Hong Kong and later received a Master Degree of Food Science at the University of California, Davis in the U.S., where he also discovered a flair for teaching as a chef-instructor in the university’s extension program. In 1978, he launched the now classic Yan Can Cook series, infusing cooking lessons with his brand of humor and skill.

For four decades the Yan Can Cook show has been broadcast on public television in the U.S. Generations of audiences have grown up watching his shows and learning the joy and wonders of Chinese and Asian cuisines. In the past decade, Chef Yan has filmed his popular series in other Asian countries such as Malaysia, Singapore, Vietnam, Korea and Thailand. Yan Can Cook: Spice Kingdom, a 13-part series based in Chengdu, China, has just made its debut on public television in the U.S. This will be followed by Taste of Malaysia with Martin Yan, a 13-part series produced on location throughout Malaysia, and another 13-part series of Korea Food Alive.

Teaching remains close and dear to the heart of Chef Yan. He is a popular guest instructor at many top culinary institutions around the world such as The Culinary Institute of America, Johnson & Wales University, and Le Cordon Bleu Schools.

Chef Yan is also a prolific restaurateur. One of his restaurant projects, M.Y. China in the San Francisco Bay Area, offers a gourmand experience.

As a professional food consultant and promoter, Chef Yan is a popular culinary ambassador for many major food and hospitality companies. His list of industry-leading clients includes the Compass Group, Caesar’s Entertainment Group and City of Dreams- Macau and his corporate sponsors include General Electric, Meyer Corporation, Lee Kum Kee and Kikkoman.

Chef Yan is the recipient of numerous national and international awards and honors from notable institutions which include: The James Beard Foundation Awards, The Antonin Careme Medal, The American Culinary Federation and the American Academy of Chefs.

A Simple Guide to Chinese Ingredients Yan Can Cook, Inc. (1994)

The Yan Can Cookbook Doubleday (1981)