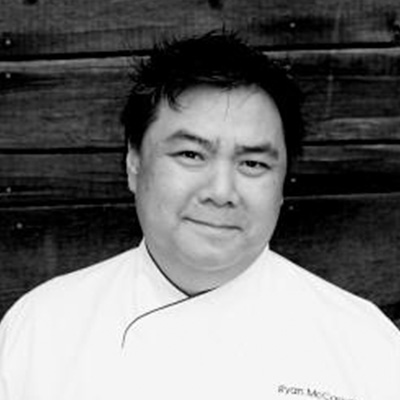 A native of Saigon, Vietnam and raised in the northwest suburbs of Chicago, McCaskey discovered his passion for cooking at an early age. As a youngster, he would watch his grandmother recreate handed-down recipes, helping her out as he could, and his interest was piqued. Lucky to have traveled extensively throughout his childhood, McCaskey was exposed to many different cultures and flavors, and to this day employs a multi-cultural approach in the kitchen.

He next attended the School of the Culinary Arts at Kendall College (Evanston, IL), and while at school, worked at the three-star Greenery (Barrington, IL) and at the acclaimed Tuttaposto under Tony Mantuano, working various stations in the kitchen. McCaskey had the foresight to learn all stations, both savory and sweet , as he knew these skills would serve him one day when he ran his own kitchen. He then accepted a position as sous chef and pastry chef – at age 20 – at Goose Cove Lodge in Maine. After graduating (1996), McCaskey moved to Wisconsin, accepting a position as Chef de Cuisine and Pastry Chef at the Black Locust (Fish Creek). While at the helm, the restaurant was named one of the top three restaurants in the state by the Milwaukee Journal. Ryan then opted to return to Chicago, working as chef de cuisine at Vivere and then at the acclaimed Rushmore, where he returned to his contemporary American roots. When Rushmore closed unexpectedly (due to a fire), McCaskey took some time off, to broaden his kitchen skills staging at the four-star Trio under Grant Achatz and TRU under Rick Tramonto, as well as working at Les Deux Gras, Rhapsody, and Allen’s. He next worked as Executive Chef at the Moroccan Tizi Melloul. In 2007, McCaskey was the Executive Chef at the four-star Courtright’s (Willow Springs, IL).

Acadia opened in late 2011 and has since garnered accolades from both local and national sources. The most noteworthy accolades in the 7+ years since opening have been a Michelin star after 9 months of being open. Acadia received its second Michelin star in 2016 and has retained ever since. Acadia also had a 5- Star rating from AAA from every year since 2013. Other awards have been Best New Restaurant- Jean Banchet Awards 2012, and 6 Semi-finalist nominations for Best Chef Great Lakes by James Beard Foundation.

Seeing a guest have a great experience, providing them a culinary memory, is what drives McCaskey to strive to provide the best he possibly can. His mentality is to keep pushing for more, and hopefully keep carving Acadia into the folklore of Chicago restaurants for years to come!